Mr. Wentworth worked with Texas Can Academies for 16 years, Cars for Kids for 11 years, and proudly served in the Marine Corps for 20 years.

It is with deep sadness and heavy hearts that we inform you of the passing of Malcom Wentworth II, the dedicated CEO of America Can! Cars for Kids, at the age of 58. He is survived by his wife, son, daughter, mother, brother and sister.

Malcolm enlisted in the US Marine Corp in 1982 and served 20 years for his country while also obtaining his Bachelor’s Degree in Business Administration and Management from Saint Leo’s University. He married his wife in 1983 and after his service, they moved to Texas to raise their son and daughter. In the spirit of service, Malcolm began working at the YWCA of Metropolitan Dallas as their Director of Business Services. It was here that he began giving back to his community and was noticed by Texans Can! Academies founder, Grant East.

While working at Texans Can! Academies from 2005-2021 as their Chief Operating Officer, he also accepted the position of Chief Operating Officer of America Can! Cars for Kids in 2011. Malcolm accepted the position of Chief Executive Officer in 2021. Malcolm will be remembered as more than a CEO; he was our leader and our beloved family member. Malcolm’s enthusiasm, generosity and willingness to help knew no bounds and he will be dearly missed by all who were fortunate to know him. We will all miss him more than words can express.

He embraced America Can! Cars for Kids with open arms and we considered ourselves honored to work alongside someone with such dedication, skills, and tenacity to champion Cars for Kids’ mission. Malcolm’s legacy will live on as he worked tirelessly and passionately for the organization in many ways changing the lives of thousands of kids across Texas and for that we will forever be grateful.

He always said, and truly believed “Write Off the Car, Not the Kid”® 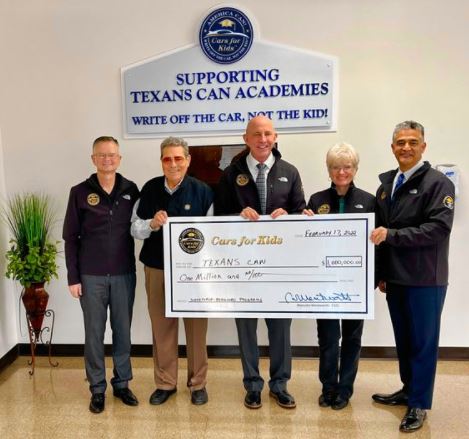 Dallas, Texas: Cars for Kids has reiterated their commitment to giving kids an opportunity to build a better future as the nonprofit recently donated $1m to Texans Can Academies. The goal is to help at-risk high school kids find jobs as well as seek post-high school work training programs, a cause the nonprofit has championed for more than three decades.

Education is popularly described as the lifeline of any society that seeks development. Over the years, studies have revealed an increasing rate of at-risk high school students who eventually fail to graduate and subsequently become a liability to themselves and the community. Several initiatives have been put in place to help kids in such a situation. However, more needs to be done in this regard, especially in terms of funding educational facilities that have taken the cause to heart. Consequently, Cars for Kids is dedicated to the goal of changing lives and helping kids graduate by donating to Texans Can Academies of Dallas, Fort Worth, Houston, Austin, and San Antonio.

The approach adopted by Cars for Kids is particularly unique, encouraging more people to donate their vehicles. With every car donation going towards helping at-risk youth, Cars for Kids helps provide kids opportunities for them in an environment where they can flourish and graduate. The program covers all 50 states, with a team of knowledgeable and friendly donation specialists, led by CEO, Malcolm Wentworth, available to provide answers to the concerns of donors. As part of the goal of encouraging people to donate to create a better world for all, Cars for Kids provides free towing and accept cars, trucks, vans, motorcycles, RVs, campers, jet skis, forklifts, trailers, or almost any type of vehicle, irrespective of its condition.

Texans Can Academies have been the recipient of donations over the years and it has gone a long way in helping to develop responsible members of society across all walks of life. The donations include proceeds from the sales of donated cars as well as cash donations from members of the public.

For further information about Cars for Kids and how to be a part of the laudable life-changing initiative, visit - https://www.carsforkids.org/. The campaign also continues across social media, including Facebook and LinkedIn.