New Wife, Mother Seeks to Help Others as Registered Nurse

There was a time when Ana didn’t have much hope for what her future might hold. Her days were filled with severe bouts of depression, sadness and even thoughts of suicide.
read more

Eboni is a student at Fort Worth Can! Academy-Campus Drive.
read more

Alexis graduated in June. She is now enrolled in Medvance, a technical school, where she is studying medical office administration. She will begin classes July 6th and plans to complete her studies in eight months to one year.
read more

I moved to Houston with my family from Honduras when I was 8 years old. I have always worked hard in school and dreamed of going to college one day to obtain a degree in Business Management.
read more

Determined Student Sets Example for Others

The halls of Houston Can! Academy are filled with students who were at-risk of not completing their high school education. Nikosha is no different. But what is different is her unwavering determination.
read more

New Wife, Mother Seeks to Help Others as Registered Nurse 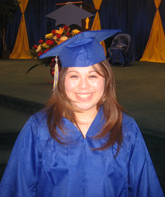 There was a time when Ana didn’t have much hope for what her future might hold. Her days were filled with severe bouts of depression, sadness and even thoughts of suicide. Today, Ana is a new mom, wife and a young woman who sees a positive outlook for herself and her family’s future. She credits Houston Can! Academy Hobby campus for helping change her life and providing the foundation she needed to pursue her dream of becoming a registered nurse. “When I was going to South Houston High School, I was always fighting, hanging out with the wrong crowd and not going to class,” said Ana. “I knew if I stayed there I wasn’t going to be able graduate so I could better my life.” Ana, like many at-risk students who attend Houston Can! Academy, just needed an educational environment to give them the hope to become somebody extraordinary despite the challenges they have faced in their life. “I came here three years ago in the middle of tenth grade,” she explained. “The environment has been really good. There haven’t been any fights and the teachers really care and take time. My favorite classes were reading and parenting, which was very helpful, especially since I was about to have a baby and I learned a lot.” Ana found teacher expectations to be high, but that they were always there for support. “I failed the TAKS once the science part, but I passed all the other subjects on the first try,” she said. “The teachers gave us a lot of extensive tutoring for the test which helped. If you want to come here and take care of your business, you can definitely do it here.” Part of the first graduating class of 2008, Ana didn’t wait to get her diploma before starting to take a few nursing classes at San Jacinto College. She says she is up for the challenge of finishing the four year program while juggling school, work and motherhood duties for her son, Julio Jr. “My sister died of AIDS and I wanted to be a Doctor, but that was going to take too long, explained Ana. “I still wanted to be in the medical field so that I can help others, and nursing is a good way to make a difference.”

Eboni is a student at Fort Worth Can! Academy-Campus Drive . When her mother, Demisha, was asked why she chose to enroll Eboni at our campus when she could have attended school anywhere, she replied, “I loved the principal’s perspective on discipline. The school was structured and the teachers kept in contact with me if something was wrong as soon as it happened, instead of waiting for it to get out of hand.”

“Eboni never complained about this school, she loved her teachers (especially Ms. Tambo), and her student advisor (Mr. Williams), who she still calls almost every week”, she added. While on campus, Eboni participated in the school’s Summer Leadership program and several activities offered by the campuses’ 21st century program.

Eboni’s hardwork and tenacity in earning extra credits for advancement via summer school and PLATO allowed her to graduate one year ahead of schedule. She was chosen by Jarvis Christian College to attend their Summer Bridge program and was later awarded a scholarship to attend this fall.

Alexis graduated in June. She is now enrolled in Medvance, a technical school, where she is studying medical office administration. She will begin classes July 6th and plans to complete her studies in eight months to one year. She wants to get a job, gain some experience and income, then go back to school to be certified as a radiology technician and work in one of Houston’s hospitals.

Alexis has been enrolled in Houston Can! since the 10th grade. She was frustrated in her previous large public school because of the class sizes and interruptions. Other kids were “class clowns” and disruptive in the classroom and often prevented the teachers from teaching. She wanted to learn and felt like her time was being wasted by the other students and teachers. She would get mad and say things to the teachers about their lack of classroom control, which got her in trouble. She said she had a lot of attitude problems with the situation that she should have handled better. Her attendance began to suffer. She would do her work, turn it in and leave class. She would go to all three lunch periods and miss class. Her grades were good but her attendance was very bad and she didn’t receive credits for the classes.

A friend told her about the Can! and she decided to enroll. She liked the way the class sizes were small, classes were concentrated to core subjects and were half days. She struggled with math concepts since elementary school but the teachers at the Can! simplified the information and made it easy for her to understand. She passed the math portion of the TAKS test the first time she took it at Houston Can!

Alexis was able to graduate on schedule for her age in spite of the lost credits from her previous high school. Growing up was not easy for Alexis. She said she was “tugged and pulled” in several directions from a young age. She had lots of anger issues. Her Dad worked three jobs to support the family so was not around much for guidance and leadership while she was growing up. She met her mom when she was 16. She has had to work to help support herself since she was 16 and is “pretty much on her own now.” 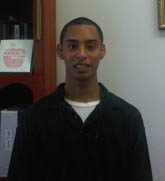 August 24, 2010 I moved to Houston with my family from Honduras when I was 8 years old. I have always worked hard in school and dreamed of going to college one day to obtain a degree in Business Management. I attended Cornelius Elementary School and Ortiz Middle School. After completing my 9th grade year at Chavez High School, I realized that in order for me to fulfill my dream, be a role model for my younger brother and cousins, and the first in my family to graduate from college, I needed to walk an extra mile.

With that in mind, I decided to enroll in Houston Can! Academy Hobby campus. It was one of the best decisions I have ever made. Houston Can! Academy has many academic programs to help students such as my self be successful. They offer small settings, which is what I need to help me reach my goal of early graduation and fulfill my dream of going to college. I am so proud of Houston Can! Academy which is an excellent school for students with goals and I plan to graduate with commended performance. Respectfully, Jairo

Determined Student Sets Example for Others

The halls of Houston Can! Academy are filled with students who were at-risk of not completing their high school education. Nikosha is no different. But what is different is her unwavering determination to take her life in a new direction, despite being dealt a tough life. To meet her you would never think such a warm, friendly and smart young girl has been through so much. An unstable family, financial issues and even the loss of all her clothes and personal items aren’t enough to deter Nikosha’s mission to graduate and go to college. Before Houston Can! Academy, Nikosha found herself unfocused and quickly loosing interest at her previous school. “Before, I was missing so many days of school.” However, at the behest of her friend, she changed her outlook on education Nikosha earned the 2005-2006 Student of the Year award in the Ninth grade center because of her perfect attendance and high academic performance. This was quite an honor for a girl many would agree had every reason to quit school. “Instead of stopping at the hurdles she faced, Nikosha has continued to jump them and be an example to other students,” said Lonnie Dearman, student advisor. “Mr. Dearman was a wonderful counselor to me. I could always depend on him and feel assured that any confidential information I shared with him didn’t go anywhere,” adds Nikosha. While balancing school and studies, Nikosha, the oldest of six, also works part-time to help with family expenses. “It’s important to me to set a good example for my siblings. They look up to me,” adds Nikosha. When asked about her favorite subjects and college plans, Nikosha’s eyes twinkle as she talks about Math, Integrated Physics & Chemistry and her goal to attend Lamar University in Port Arthur. “When the school took us on a visit to Lamar University, I just fell in love with the school and campus. Ever since, I have had my heart set on going there to pursue a degree in Psychiatry.” “I really like to talk to people and help them with their problems.” Statistically speaking, Nikosha should be anywhere but Houston Can!, but thanks to her determination and the staff of Houston Can! Academy, she won’t leave until she achieves her goals.